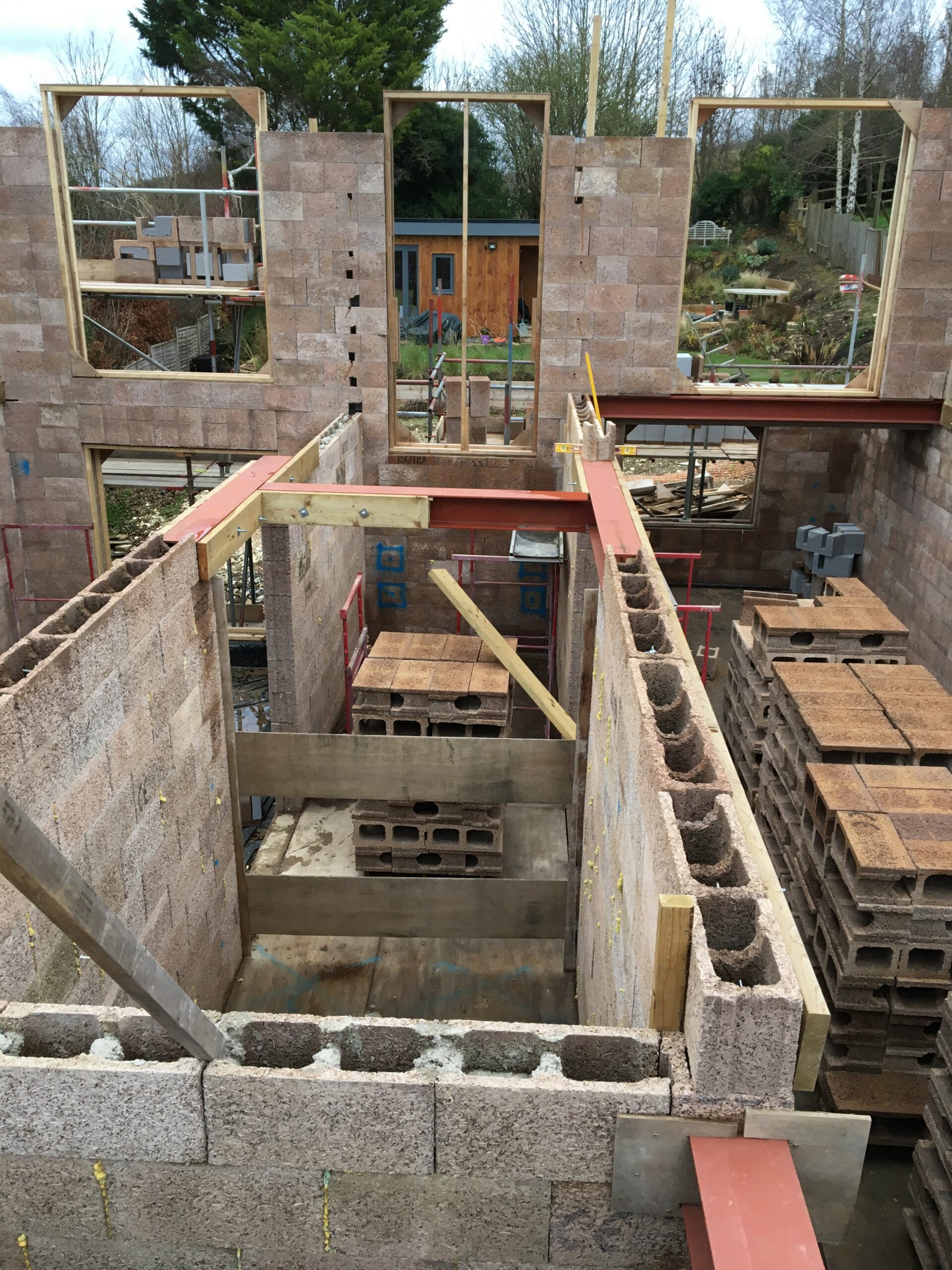 The supply chain continues to challenge the project programme and defeat each and every deadline!

The week of Monday 13 December started well with the concrete beams being delivered first thing by Peppards Building Supplies and all of the beams then being lifted into place on the same day using a crane from Earp Lifting.  Sam and Lewis of Insul Hub made short work of cutting the beams to size and laying all of the blocks. 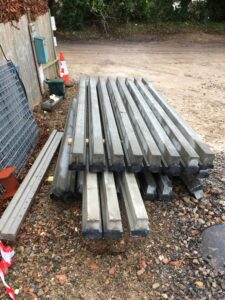 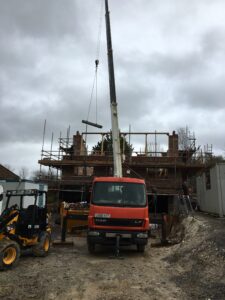 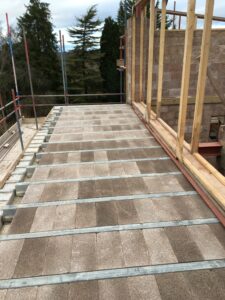 Posi-joists for the top floor and the roof were due to arrive on Monday 13 December, which then slipped to Wednesday.  On Wednesday, the factory had a “mechanical failure” and word arrived that they would be delayed until Monday 20 December.

The concrete pump and concrete had been booked and confirmed for Tuesday 14 December.  However, late on Monday evening, the company pulled the pump which meant that we were unable to pour on Tuesday.  More frantic ringing around and the earliest that both a pump and concrete could be re-arranged for was Tuesday 21 December.

On Monday 20 December, the steels for the roof finally arrived so these are now on site and ready for installation.  However, there was no sign of the long-awaited posi-joists.  Sam and Lewis were poised ready to install them, chased the company several times, but, as the day went on, it was clear that they would not arrive. 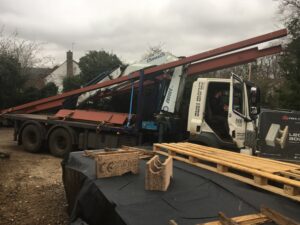 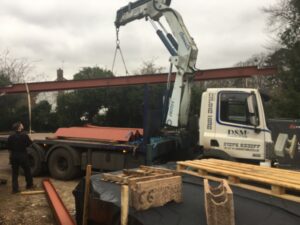 On Tuesday 21st, we were due to pour the concrete for the top floor walls.  The concrete pump was confirmed in writing along with the volumetric mixers.  However, at the appointed hour, a line pump arrived in place of the boom pump.  The line pump would have been fine if we were pouring the slab but it is useless for the walls, which need to be poured from above.  After some “discussions” the supplier admitted their error and re-booked for Thursday 23rd.  However, 2 people had travelled down from Sheffield specifically to ensure that the pour ran well.

In the midst of this, a large truck arrived from Crendon Timber Engineering with the long-awaited posi-joists for the floor joists and the roof trusses!  Luckily, the forks were still on site otherwise there would have been no means to offload.  So, finally, we now have all of the posi-joists on site that we need to complete the floors and the roof structure.  The team sprang into action and by the end of the day, Sam had installed all of the joist hangers on the south side and half of the posi-joists. 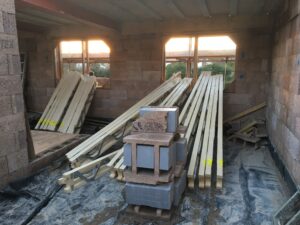 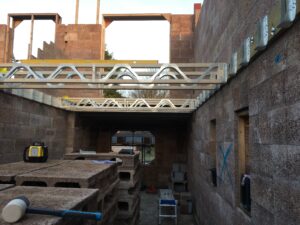 Meanwhile, Den and Dave (Insul Hub) carried out final checks on all of the levels and heights for the roof beams to we ensure that the 2 roof elevations are set at the specified 7 degrees above the horizontal. 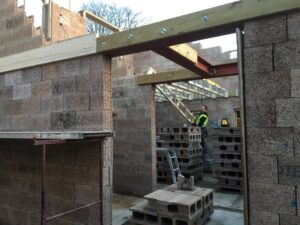 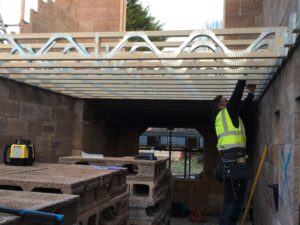 Thursday 23rd dawned mild and damp; perfect for a concrete pour.  First on site was the concrete pump from Camfaud which arrived promptly at 0730hrs.  This pump had a 36m boom in order to be able to reach all parts of the structure. 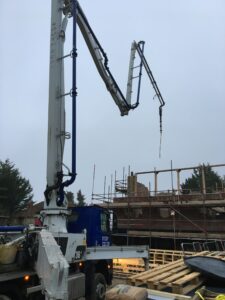 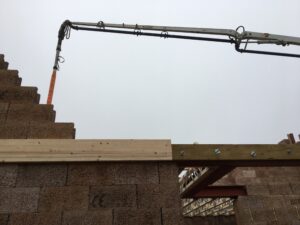 However, it meant that the pump vehicle could not get right into the site as it had considerably larger outriggers that the previous models.  Consequently, when the volumetric mixer arrived from Ashville Concrete at 0800hrs, it was unable to reverse onto the pump without blocking the road.  Of course, it was also bin day but, with help from our bin men, we ensured that everyone’s bin was emptied! 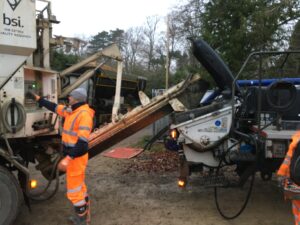 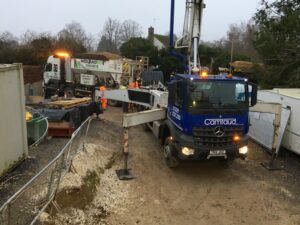 Once these little difficulties had been overcome, the pour went smoothly using just under 7m3 of concrete under the eagle eye of Dave from Insul Hub who oversees all of their pours. 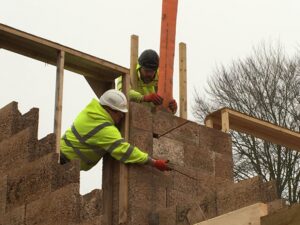 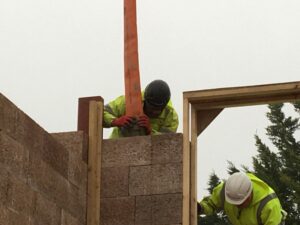 Now that we have all the critical supplies on site, we are looking forward to making good progress in January.

That’s it for this year; the site will start up again on 4 January.  A very Happy Christmas and best wishes for 2022 to all of our readers!